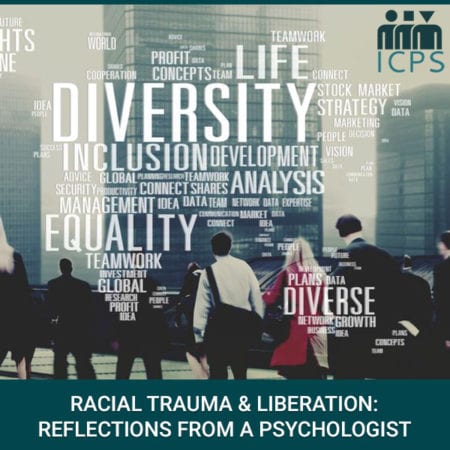 Trauma is broadly defined as a “disordered psychic or behavioral state resulting from severe mental or emotional stress or physical injury,” according to Merriam-Webster. Through a quick perusal of the news, a discussion with a close friend, or a glance at history, we can see the significant psychological and physical trauma endured by People of Color (especially as we face political and social paradigmatic shifts in our nation). Yet according to the Diagnostic and Statistical Manual-Fifth Edition, traumas such as sexual abuse, a close encounter with death, or witnessing a death are necessary criteria for receiving a Posttraumatic Stress Disorder diagnosis; however, racial trauma is not included in the necessary diagnostic criteria (American Psychiatric Association, 2013).

Meta-analyses, or analyses conducted on groups of research studies, have found that racial discrimination is significantly linked to increased depression, distress, obsessive- compulsivity, stress, and anxiety among People of Color even after controlling for relevant variables (Lee & Ahn, 2012; Carter et al., 2019). Regarding post-traumatic stress specifically, Latino male combat veterans who reported higher levels of perceived racism also had higher levels of PTSD in one study (Ruef, Litz, & Schlenger, 2000). In my dissertation, I also found that both racial microaggressions and overt discrimination were positively linked to PTSD symptoms among a diverse sample of Latinx American individuals.

Although there is significant empirical support for the racial discrimination-negative mental health link, there is also hope and evidence that some variables can reduce the negative effects of discrimination. Social support, cultural strengths, socialization to one’s racial/ethnic group,  posttraumatic growth, and engaging in social change are a few notable buffers. It is important to access the right form of social support (e.g., active social support and coping that does not avoid the problem) from an appropriate social network (Pascoe & Richman, 2009). Culture-specific strengths, such as familismo (i.e., close familial relationships among immediate and extended members) have also been found to serve as powerful buffers for Latinx individuals (Consoli & Llamas, 2013). Racial socialization, or meaningful socialization within one’s racial/ethnic group, has been supported as an additional buffer (Vines et al., 2017).

As a Latina facing racial discrimination throughout my personal life and career, I truly believe in the power of meaning-making to transform one’s experience following painful events.

This brings us to Posttraumatic Growth, defined as positive change in the self, relationships, or one’s worldview that results from trauma (Tedeschi & Calhoun, 2004). It does not negate the pain resulting from the trauma; rather, it is a complimentary experience to that pain that can improve  psychological well-being. I experienced daily microaggressions growing up and later in life as one of the only Latina psychologists in many workplaces; however, over time, I naturally began developing Posttraumatic Growth. This has meant a life-long commitment to small and large ways to engage in social change. This was part of what informed my desire to pursue racial discrimination research, as well as work with culturally diverse individuals in therapy, coaching, testing, and consulting. My experiences of discrimination led to finding my calling.

Notably, in Liberation Psychology, collective resistance and generating systemic change are ways to reduce the personal and communal effects of racial discrimination (Chavez-Duenas et al., 2019). This can look differently from person to person, but it helps to explore areas of interest and to begin with a tangible and measurable goal, such as increasing involvement in a non-profit organization that supports one’s racial/ethnic community. Ultimately, social justice change can be pursued through numerous methods. The most important component of liberation is finding the right personal method to generate change in one’s racial/ethnic community while improving one’s mental health. Through those experiences, it is my belief and hope that individuals find the empowerment that was within them all along.